I’m a Loser, baby, so why don’t you take me to Sobleman’s and feed me a Loser Burger?

My second review comes as much less of a surprise than my first one.  My title is definitely more creative.  This time, I carefully planned a trip to Sobleman’s (one of Milwaukee’s most famous burger spots) after a visit to Marquette’s law school and a tour of some Milwaukee neighborhoods (one of which will hopefully be my future home).  Joining me on this trip was a friend from Evanston, along to give (hopefully) informed advice on where I should live

After arriving in the city my friend and I made our first stop at the Marquette Law School.  If you’ve never taken a trip there I highly recommend it. The building is beautiful and I can definitely see myself spending three years there, though I suppose the less time I spend there the better I’ve done…or maybe it’s the opposite. Oh well. Nonetheless, the building was beautiful.

After heading to Sobleman’s (I’ll get back to Sobleman’s soon) we decided to visit a few neighborhoods.  The Third Ward stuck out the most, but I was pleasantly surprised with the large number of cool neighborhoods.  If you’ve got any tips on somewhere to live (or a really nice, cheap apartment…or a massive house/condo that you need me to house-sit for the year for free…or know someone who does) let me know. I just re-read that previous sentence and realize how creepy it sounds.  Or maybe it sounds desperate…though I suppose there is a bit of creepiness in desperation…or in this paragraph.

Right then…back to the review. So, between visiting Marquette and our quick tour of Milwaukee we had time to visit the legendary Sobleman’s.  We arrived at around noon on a Friday, so we were prepared to wait awhile for a table. Luckily, there just happened to be two spots at the bar where we sidled up next to a big TV that just happened to be playing the Women’s World Cup!  Milwaukee seems to be a bit of a soccer town. Score!

After sitting down, our incredibly friendly and helpful bartender/server/super nice guy came over and took our drink orders. I had the usual (Diet Coke) and my friend grabbed an iced tea.  Solid choices all around.

We must have had confused looks on our faces because our server carefully (and thankfully) explained our options to us.  It was a bit of an overwhelming explanation (too many choices…brain can’t function…) but we both settled on the Loser Burger which is a 1/3 lb prime angus burger served with two slices of Wisconsin’s own Nueske’s bacon, marbled Colby cheese, and diced butter onions.

Speaking of the Loser…what a brilliant name for a burger!  I realize that the name comes from the Food Wars episode against AJ Bombers, but it is still a brilliant name. I grabbed the Loser both for the name and because it reminds me of the Beck song.

Around 10 short minutes later (made easy by the excellent women’s soccer match between England and New Zealand ) our burgers arrived. Both of us were at first very intimidated by size of the burgers and were a little perplexed by this seeing as the Loser is only 1/3 lb.  I quickly realized that the bun was HUGE!

This burger is definitely not a loser, but would we call it a winner?

The bun was very good but dominated every single bite.  It is one of the better buns I have tasted but would have been much more effective on a larger burger (or the double…I should definitely have done the double).  Despite the bun’s dominance I was able to get a good feel for both the cheese and the bacon.  Both the Colby and the Nueske’s were the stars of the burger. The cheese was beautiful melted and delicious while the bacon was perfectly cooked with a rich, smoky flavor. 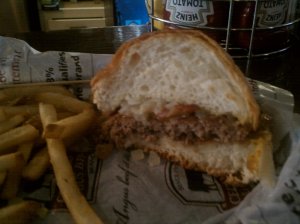 The bun in all it's massive, overwhelming glory.

Sadly, I did not taste nearly as much beef as I would have hoped. On my next trip I’ll have to have a double, though I may not be able to eat for the rest of the day if I do!  Nonetheless, it was a really solid burger.

On to the review!

Bun (1-5): 2.5 (4 on a larger burger)
– I know this bun has been given really good reviews elsewhere but I think it was a tad overwhelming for the 1/3 pound patty. While the bun was fresh, fluffy, and tasty, it became the focus of every bite masking the onions and cheese (one of the standouts of this burger).  On a larger burger this bun could have really contributed to the taste, but all it did was overwhelm this one.

Bacon (1-5): 5
– The delicious flavor of the Nueske’s bacon is almost worth the burger itself.  My slice of Wisconsin’s own Nueske’s bacon was perfectly cooked (not too crisp, not too soft) and filled the burger with a brilliantly smoky flavor. It was one of the better slices of bacon I’ve had in Milwaukee…ok so it is the only slice of bacon in Milwaukee but it will be hard to beat!

Onions (1-5): 2
– The buttery onions brought a nice addition to the burger but I personally would have preferred them sliced rather than diced.  There just wasn’t enough of the onion flavor that I typically expect from my burger. I think larger onions would really add a lot to the Loser Burger.

Cheese (1-5): 4
– Who knew that marbled Colby cheese could be so delicious on a burger? Definitely not me. Once again, I was apprehensive of the cheese on my Milwaukee burger, and once again the cheese turned out to be one of the better parts of the burger. It brought just enough flavor and was almost able to overcome the too fluffy bun.

Beef (1-5): 3
– I realize that the Loser is made with prime angus beef, but it was hard for me to get a good feel for the taste of the beef from smallish 1/3 lb patty and almost overwhelming bun.  What I did taste of the patty was quite good, but I would have enjoyed more.  Next time I go to Sobleman’s I will make sure to grab a double.

Fries (1-5): 4
– The Sobleman’s fries were very good.  Nothing about the fries really stands out to me, but they brought a lot to the table. They were thinly sliced and perfectly fried and full of flavor. A great addition to the experience.

Atmosphere (1-5): 800000
– There aren’t enough zeros in the world to place after a number that can describe how great the Sobleman’s experience was. My friend and I sat at the bar and were treated like kings by our server. He carefully and patiently explained the menu options and was both prompt and friendly.  If I were a fan of the drink (I know! How can I move to Milwaukee and not drink?!) then I’m sure I would have enjoyed what looked like an incredible Bloody Mary.  The community and atmosphere are enough reason to go back to Sobleman’s many times.

Recommendation:
– Though the Loser Burger wasn’t all that I hoped it would be, I will definitely be returning to Sobleman’s. There are many burgers to try (I recommend doing a double) and I’m sure I’ll be able to head back and grab another review.  Milwaukee’s finest hospitality is on display at Sobleman’s.  Sobleman’s is a great place for a meal at any hour, and made an especially good locale to grab an afternoon soccer match.
– I’ll give the burger 2.9 out of 5 and I’ll give Sobleman’s a 5 out of 5. GO. DO IT. It’s for your own good, really.